Today I’m thrilled to share with you an interview I did with Morgan Hobbes of TheAudiobookReview (eek, my first interview! I didn’t know what to expect, but Morgan was lovely.)

TheAudiobookReview is home of fantastic interviews with authors, amazing new audiobooks (and free promo codes!), and much more. Follow the link here to get the latest audiobook news, but for now read on as Morgan looks into what got me started writing…

Today I’m talking with author Jill London about her Middle-grade Fantasy Fairy-tale, Evertrue. We get a glimpse behind the inspiration of the book, which my kids and I thoroughly enjoyed listening to (check out the review!). Narrated by the talented Emma Stansfield, if you’re a fan of Roald Dahl and J. K. Rowling’s The Ickabog you’ll enjoy the heck out of this one.

M: Jill, thank you for taking the time to talk with us here at The Audiobook Review. Starting with an easy question to get us started, can you tell us a little about yourself and what got you into writing?

J: I live in the UK, in a small town in the Midlands, with my husband, two daughters and two dogs. I’m London born and bred, however, and it was here that my love of writing began. My teacher, Miss Scarlett, read to us often, introducing us to the work of Roald Dahl, Philippa Pearce and others, but it was C. S. Lewis’ Narnia stories that got me into writing.

My mother was an artist, but she was a gifted storyteller, and so my childhood was flavoured too with stories of her life growing up in Scotland, on a farmstead of curious, funny people. Some of her stories were pure fantasy, and I soon realised the lines between truth and fiction were fluid and that these tales could be made to delight or amuse or to frighten your socks off, but the best ones did all those things at the same time! I began writing stories while I was still at school, and mum drew the cover for my first book, about a firebird, set in a faraway, magical world.

M: It sounds like you never stood a chance! With so much inspiration surrounding you, it was inevitable. My kids and I were introduced to your writing through the audiobook for Evertrue, and my youngest (seven) was particularly taken with it. Are we likely to see any more stories in this world?

J: I’m so glad she liked it! Hearing from readers who enjoyed my work is the best thing ever. I do have a few sketches for another story set in Preznova, which I might return to for fans of Evertrue, but I’m currently working on a couple of other stories at the minute. One is a much longer, time-twisting, fantasy adventure based on Greek mythology which I’m in the final stages of editing. The other I’ve just begun; a story of witches set in a sleepy English village of ancient woodland creatures and magic but with – I’m hoping – a fresh, slightly chilling narrative.

I tend to write wherever an idea takes me, and I like to think that with each story I keep my readers as surprised as I am where that will be! As a reader, I know I never want a good story to end, but as a writer, I want each sequel to feel fresh and unique, with as much love lavished on it as the original. To do that, I think trust is vital. If a writer is good, I’ll follow wherever they take me.

M: On YouTube, you have a video from your trip to Slovenia, and I can see how it inspired the world of Evertrue. Was the idea for the story something started bubbling away during the trip or something that came after?

J: I was between novels, and I knew I wanted to write something much shorter and lighter. I’d recently finished reading Philip Pullman’s Clockwork and the Firework-Maker’s Daughter, and I was taken with the idea of writing something similar, but I had no subject matter in mind. So I put it aside and shortly after we went on holiday to Slovenia. I’ve long been fascinated with caves, and the cave systems in Slovenia are a big draw for tourists. They’re absolutely stunning, and every cave had something unique and awe-inspiring to wonder at: A huge bridge running across a deep cavern, an underground river, and a water salamander that, through a marvellous bit of PR, is transformed into a baby dragon.

The stalagmites in one section looked to me like a tiny replica of Oxford, with its dreaming spires, and I was soon imagining what creatures might live in this miniature city, gazing out of their windows at the big folk. And that was me off and running, dreaming up another story, and what with the dragon and the fairy-folk, it had to be a fairy-tale.

It really gelled when Mila turned up, so confident that she knew ‘her caves’ but with little idea just how far down they go and what monster might lurk there. I had a lot of fun writing Evertrue and loved being able to use such bright, over the top characters, which Emma went on to narrate so vividly. I think the fun really shines through for listeners.

M: What a coup it was to get such great voice talent! Emma’s reading was what sold it for my girls originally. They’re notoriously picky about who they’ll listen to, but Emma had them sold straight away. While on the subject of audiobooks, how was your first experience getting one made? Did anything in particular surprise you, or do you have any words of wisdom for authors looking to branch out into audio?

J: It was incredible good luck! I had no idea what to expect when I decided to turn Evertrue into an audiobook. I uploaded the script, wondering if I would even hear back from anyone, but I was pleasantly surprised – making an audiobook is a collaboration, and narrator/producers are looking for scripts to work on! I received a few auditions within hours and started to feel hopeful that something might come of it all.

Then I got an email from Emma, and I got to hear her read, and it just blew me away! Emma has been an actor and voice artist for over 20 years, appearing in films and in theatre, and her range of accents is amazing. I don’t think I’ll ever get over hearing my story narrated by such an awesome talent!

For anyone thinking of trying the audio format, I’d say go for it. You never know what might happen until you try.

M: That about wraps us up! Though, while I’ve only done a few interviews so far, each one so far has ended me asking about pets. So to keep the trend going – You mentioned you had two dogs. Do you have any fun stories you would like to share with us? 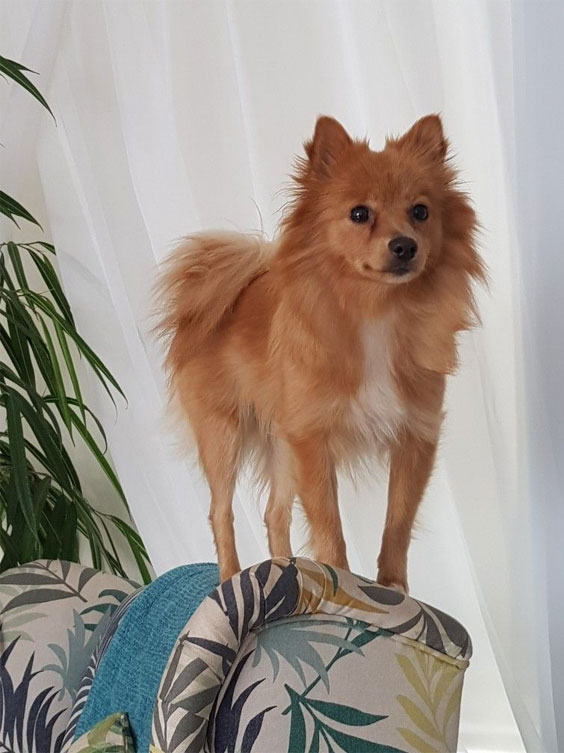 Ponyo as a Mountain Goat

J: They’re my daughter’s dogs, and still puppies, really; a Labrador called Maisie, and a Pomeranian called Ponyo. Maisie’s cute, but a little slow. We often hear her trying to chew her bowl. Ponyo is a real character; fussy and delicate, but very intelligent.

We realised she’d got Maisie under her control when we saw her using bait to trick Maisie into doing what she wants. She picks up a toy she doesn’t want and pretends to be interested in it. Then she waits for Maisie to snatch it and run off happy, and when she knows Maisie’s distracted, she’ll go get her favourite toy to play with. Like I said, she’s a real character!

M: Brilliant! Jill, thank you very much for your time. I look forward to seeing what books you put out in the future, and I’m sure my kids do as well!

You can find Evertrue: An Underworld Fairytale by Jill London on Audible and Amazon. Be sure to leave her a review! Reviews help other people like you find the right book. Authors appreciate the feedback too!

Have a lovely day.

Hi, I’m Jill, a writer and teacher living in the UK, usually behind a desk but sometimes on a sofa with a book or a film. I began writing at around age three, legibly by five, although I didn’t write any stories until I was older. Aged eleven, I began writing children’s fiction, mostly middle-grade fantasy and I’m still doing it to this day. I have had stories published online and in My Weekly magazine. The best bit about writing is when ideas pop into your head (from the writing fairy presumably?) and everything starts clipping together like a jigsaw puzzle. The worst bit? When you start to get the feeling there's a piece missing from the box... View more posts