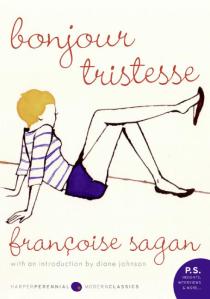 Bonjour Tristesse (that’s “Hello Sadness”) was published in 1954, when the author was only 18.

“I dreamt of being a writer once I started to read. I started to write ‘Bonjour Tristesse’ in bistros around the Sorbonne. I finished it, I sent it to editors. It was accepted.”

Isn’t that delightfully bohemian? If this were not depressing enough for us late-bloomers it should also be noted that the book was an overnight sensation, gaining Sagan a mention in Le Figaro (where she was described as “a charming little monster”). Oh, and did I mention it was also made into a film?

Sagan, ever the typical French gamine, had a vibrant outlook on life:

“One can never speak enough of the virtues, the dangers, the power of shared laughter.”

“You should celebrate the end of a love affair as they celebrate death in New Orleans, with songs, laughter, dancing and a lot of wine.”

No 41 in Le Monde’s 100 Books of the Century, Bonjour Tristesse centers on seventeen-year-old Cécile as she spends her summer in a villa on the French Riviera with her father and his mistress, and Cecile’s struggle as a daughter trapped by her father’s relationships with women. It sounds ghastly but actually I have to admit that I enjoyed it, so maybe it was talent after all…

In terms of age, however, Sagan was positively geriatric compared with some modern day examples. I’m including a very entertaining link here from Parentdish about a six-year old author…yes, six:

Is Bonjour Tristesse a fluke or the real deal? Are there any young authors that you admire, and do you think age makes any difference to a writer? I’d love to hear your thoughts.

Hi, I’m Jill, a writer and teacher living in the UK, usually behind a desk but sometimes on a sofa with a book or a film. I began writing at around age three, legibly by five, although I didn’t write any stories until I was older. Aged eleven, I began writing children’s fiction, mostly middle-grade fantasy and I’m still doing it to this day. I have had stories published online and in My Weekly magazine. The best bit about writing is when ideas pop into your head (from the writing fairy presumably?) and everything starts clipping together like a jigsaw puzzle. The worst bit? When you start to get the feeling there's a piece missing from the box... View more posts

7 thoughts on “Bonjour Tristesse and the ever shrinking author”